Author Mary Morgan Blackburn Ketchel had a ringside seat to see the first female U.S. Senator, and the first female U.S. Representative elected from her home state of Tennessee. To make the experience all the more inspiring, those trailblazing accomplishments were made by her mom: U.S. Sen. Marsha Blackburn.

Seeing women in positions of power has an unquestionable impact not only on children, but adults as well. And that was certainly true for Mary Morgan. Her mother’s story is a great example of not only professional accomplishment, but of personal and professional reinvention. She waited to seek elected office until her children were older, a reminder of the importance of setting goals, prioritizing them, and being willing to jump when the opportunity presents itself.

Both women, who share a passion for history and for civic engagement, join me in Episode 113 to talk about their latest collaboration, a children’s book written by Mary Morgan entitled “Camilla Can Vote.” The book commemorates and celebrates the 100th anniversary (coming up on August 18, 2020) of women getting the right to vote with the ratification of the 19th Amendment to the U.S. Constitution.

In this episode, we talk about:

You can find “Camilla Can Vote” here.  It’s only the beginning for Camilla! 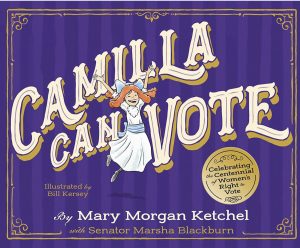