Leading From the Heart at The American Red Cross (Episode #9)

When Gail McGovern became CEO of the American Red Cross in 2008, the organization was reeling from repeated turnover in leadership, a $209 million operation deficit coupled with significant debt, outdated IT systems, an unworkable organizational structure, challenges in the Red Cross Blood Services operation, and a dated fundraising strategy. Even for a seasoned corporate executive like Gail, it was daunting. Now, 10 years later, she’s the longest serving CEO at the 186 year old organization. She has transformed the Red Cross, reducing its debt, and refocusing its mission on strengthening service delivery to meet increasing and evolving needs. We sat down with Gail at her office in Washington, D.C.  She shared tremendous leadership lessons gleaned from both the corporate and non-profit sectors. But most importantly, she shared the value she sees in learning to lead from the heart. 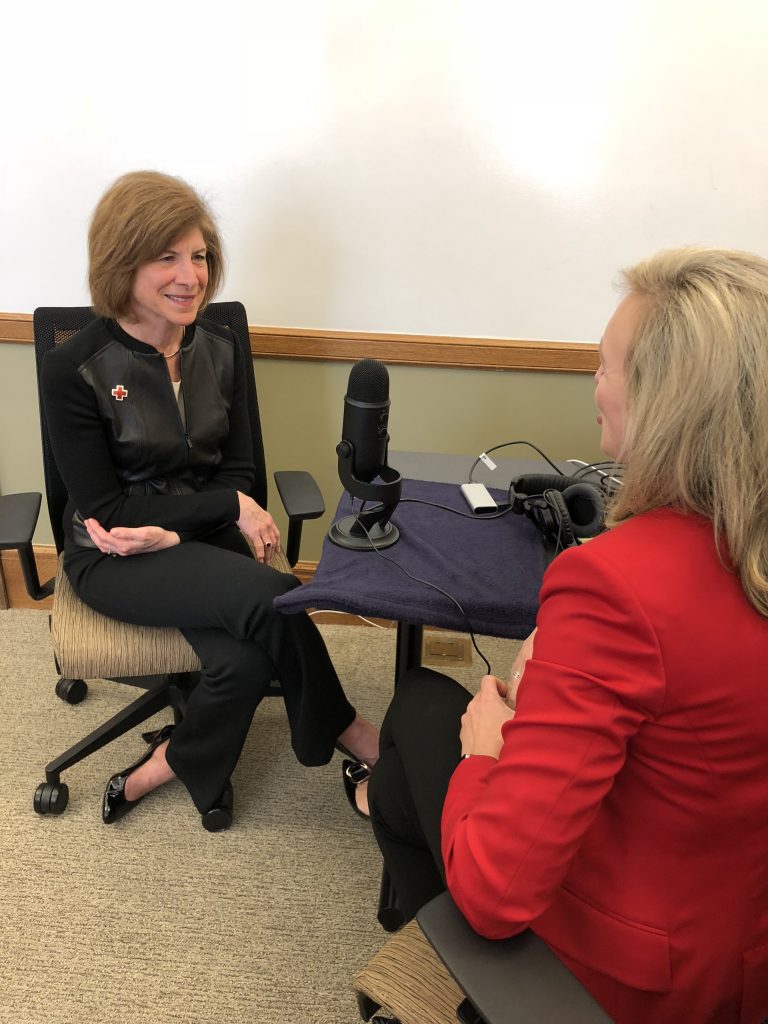 Gail McGovern joined the American Red Cross as President and Chief Executive Officer in 2008, and has taken a strong leadership role at the nation’s leading emergency response and blood services organization.

Under her direction, the Red Cross has become more effective in fulfilling its mission and is better prepared to face current and future challenges. Her transformational initiatives have led to improved financial stability and have expanded the reach of lifesaving Red Cross services. McGovern has initiated extensive modernization projects at the Red Cross. Among them are an overhaul of Red Cross IT systems and the growth of the organization’s leadership in social media and mobile technologies – including the introduction of a series of free apps that put lifesaving skills at people’s fingertips during emergencies.

During her tenure, McGovern has overseen the American Red Cross response to multiple high-profile disasters across the country and around the world, including the Haiti earthquake in 2010, the Japan earthquake and tsunami in 2011, Hurricane Sandy in 2012, Hurricanes Harvey, Irma and Maria in 2017, as well as the multitude of tornadoes, hurricanes, floods, wildfires, home fires and other local disasters that affect our country each year.

Prior to joining the Red Cross, McGovern was a faculty member at the Harvard Business School and earlier had served as President of Fidelity Personal Investments, a unit of Fidelity Investments. She was also Executive Vice President at AT&T for the Consumer Markets Division, the company’s largest business unit, and was responsible for its $26 billion residential long-distance service.

She earned a Bachelor of Arts degree from Johns Hopkins University and an MBA from Columbia University, and has since been recognized as alumna of the year from both universities.

McGovern is currently a member of the board of trustees for Johns Hopkins Medicine. She also serves on the board of directors of DTE Energy, PayPal, and The Weather Channel.

McGovern was recognized by Fortune magazine in 2000 and 2001 as one of the top 50 most powerful women in corporate America.